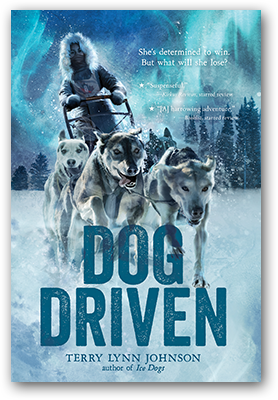 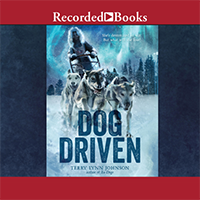 "...shows the deep bonds and trust between musher and dogs..."
—Booklist, Starred Review

Ever since her vision started deteriorating, fourteen-year-old McKenna Barney has felt out of place in the world. Out of place at home and school and even on the trail with her dogs.

Now, to help her younger sister with her own ongoing battle with eye disease, McKenna finds herself at the head of her team of eight sled dogs in a race she’s not sure she can even see, let alone win. For three days of shifting lake ice, sudden owl attacks, bitterly cold nights and frequent snow squalls, McKenna faces both the Canadian wilderness and her terrifying weakness.

But she hides the truth from everyone, including her toughest rival, Guy, despite their budding alliance. Will McKenna risk her survival as well as that of her team to keep her secret?

"The lively, crowded, chaotic world of dogs and mushers is memorably complemented by the silent, icy wilderness they race through. A densely plotted, fast-moving, thematically rich tale set at the intersection of ability and disability."
—Kirkus, Starred Review (read the full review)

"Guy and McKenna are well developed, and the action is captivating."
—School Library Journal

"In Dog Driven, Terry Lynn Johnson’s love of dogs and the Canadian wilderness shines like a beacon. As in her previous books, including Ice Dogs and the Survivor Diaries series, Johnson’s female characters are relatable, strong and able to meet the challenges in their paths. Readers will respond to this warm tale of adventure and will see in McKenna a hero to emulate."
—BookPage

"This is a first-rate adventure, replete with family love, friendship, and difficulties caused by McKenna’s external and internal circumstances. The feisty, foolish, brave heroine is a wonderful character."
—Parent’s Choice Foundation

"Johnson’s novel is an object in over-coming disabilities as well as the importance of cooperation. The content will especially appeal to readers who are interested in dogs or in northern wilderness survival."
—Patricia Jermey, Resource Links Magazine

"Johnson is the new leader of the pack for books set in the Canadian wilderness."
—Ms. Yingling Reads

"This story was an ode to dogs and their partnerships with humans."
—Lit Review Crew

"The writing is terrific, the dialogue spot-on, and the characters are well-rounded and completely believable."
—San Francisco Book Review

"There’s a quiet confidence that runs throughout Johnson’s work that permeates all levels of Dog Driven—from the setting and plot to McKenna and supporting characters."
—Cracking the Cover

I’ve been wanting to write a novel set near my home for years. The historic dogsled mail run has a rich history in Canada. It was important to burgeoning northern communities, much like the Pony Express in the US. My research uncovered heroic stories, tragedy, adventure, and even a few gangsters!

But the most important parts for me to write are always the relationships between a musher and their sled dogs. In Dog Driven, there are teams of sled dogs each with their own unique characters. I can’t wait for you to meet them. 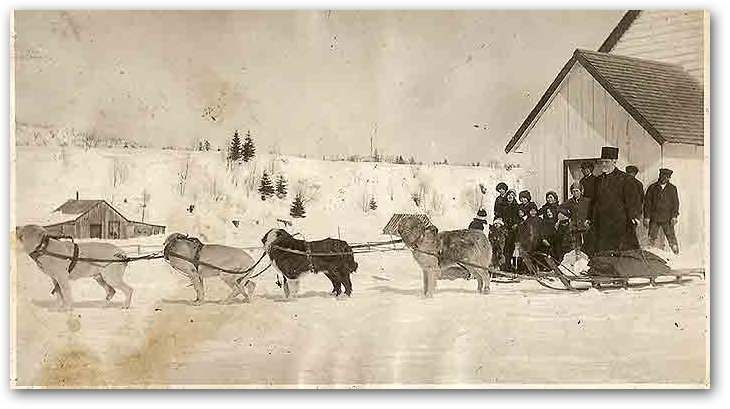 A sled dog team in Michipicoten, 1920. Photo courtesy of the Town of Wawa Heritage Committee.

I gratefully acknowledge the support of the Ontario Arts Council for providing me a grant to write this novel.